CanAlaska Uranium Ltd. [TSX-V: CVV; OTCQB: CVVUF; Frankfurt: DH7N] (“CanAlaska” or the “Company”) is pleased to report that summer drilling is now complete at the West McArthur uranium project. The unconformity related uranium mineralization intersected in Cameco’s discovery holes WMA042 and WMA042-2, has been extended 50 metres to the south and 200 metres to the west and tied to down-hole geophysics imaging of the C10 conductor package. With downhole geophysics we have now located the C10 conductor horizon, approximately 100 metres south of the original high-grade discovery. There is highly elevated uranium, lead, cobalt, boron, nickel and copper in the mineralization and associated alteration halos in all of the drill holes where assays have been received to date. The program has successfully extended the discovery footprint of holes drilled by Cameco during their recent work programs on the property. The project is a joint venture with Cameco, controlled and operated by CanAlaska. 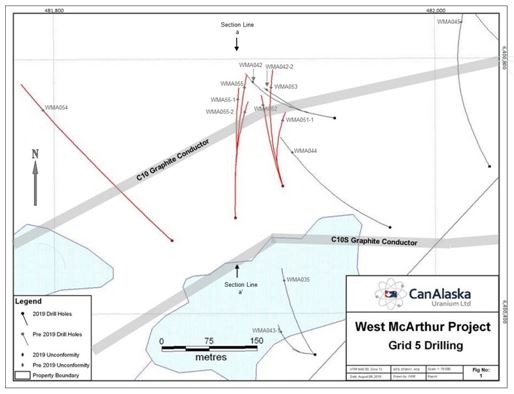 Assay data is still to be received for the latest drill holes, however eU3O8 values are reported for this release. Equivalent uranium (eU3O8) probe results are obtained using a Geovista TGGS (Triple G-M) gamma probe, which collects continuous readings along the length of the drill hole. Probe results are calibrated using an algorithm calculated from the calibration of the probe at the SRC facility in Saskatoon. A 0.1% eU3O8 cut-off is used for compositing. The downhole calibrated gamma probe results (eU3O8) are preliminary and subject to confirmation by geochemical assay, but provide a better view of the distribution of the uranium mineralization where there is significant core loss.

The drilling program, which included seven unconformity intersections from 3 new drill sites shows, that high-grade unconformity-related uranium mineralization (maximum, 10 cm @ 2.89% eU3O8 within 2.3 metres at 0.96% eU3O8 in WMA055-2) extends at least 50 metres south of the previous composite 5.5 metres @ 1.5% uranium intersection in drill hole WMA042 drilled by Cameco. The combination of high-grade uranium mineralization with faulting and intense clay alteration present above the unconformity suggests the presence of a fertile structure in the vicinity of WMA055-2. In combination with down-hole geophysics data, oriented core measurements and 3D modelling, which indicate the drilled structures are cross-cutting the main basement lithologic direction, the structure should intersect the C10 graphitic horizon (Idealized Target in Figure 2) approximately 60 metres further southeast of WMA055-2. This basement structure along the C10 conductor has yet to be intersected in the basement by drilling, but its inferred location is shown in figure 2. 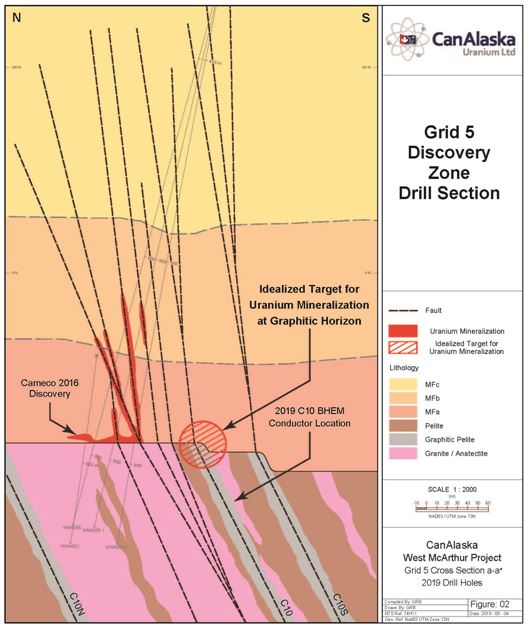 The fourth hole of the program, WMA054, located west of the mineralization intersected in drill hole WMA055-2, shows highly elevated uranium and base metal geochemistry within the lower 430 metres of the sandstone column.  This hole also intersected a three metre wide structure located 370 metres above the unconformity with associated weak, but notable, uranium mineralization (20 cm at 0.14% eU3O8). This feature can be projected back to the unconformity and matches the trace of the C10 conductor, 200 metres west of WMA055-2.

The summer program was focussed to locate high-grade uranium hosted in faults along the C10 target horizon, the major regional fault structure host to Cameco and Orano’s nearby Fox Lake deposit of 68,000,000 pounds at a grade of 7.99% U3O8. Two previous drill holes intersected high-grade uranium (up to 4% U3O8) north of the C10 target horizon and near the unconformity contact.  The controlling basement structure of this high-grade mineralization has yet to be intersected in drilling, but the current drill program provided multiple intersections of strong faulting, alteration and mineralization in the overlying sandstone which was used to progressively trace the target to the west-southwest.

The scale and intensity of the alteration halo associated with the discovery zone continue to reinforce the magnitude and importance of this mineralizing system. The lower sandstone column is altered, at times strongly, within and adjacent to the identified faults and fault-strands.

There is a clear association between the intersected controlling structures and the uranium mineralization path-finder alteration such as sooty pyrite, secondary hematite, dravite, clays, bleaching, de-silicification, silicification and base metal geochemical enrichment. This alteration fingerprint forms a very distinctive and very large halo around the Grid 5 zone, and can be traced several hundred metres to the west as evidenced in results from drill hole WMA054 where mineralization has been intersected 350 metres above the unconformity and the lower sandstone alteration contains Grid 5 fingerprint characteristics. 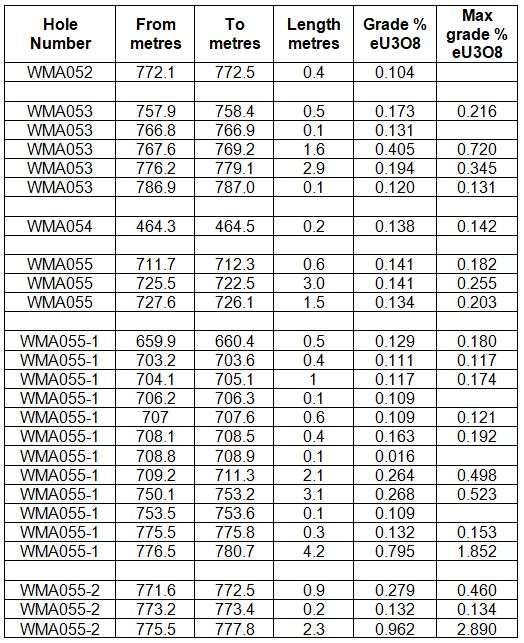 The summer drill program was operated by CanAlaska and follows the three-year targeting programs by Cameco’s exploration team.  Their ten holes drilled along a 1.6 kilometre (one mile) long stretch of Grid 5-East included three significant uranium-mineralized drill holes. The widely spaced drilling also mapped an extensive zone of intense hydrothermal alteration extending 700 metres into the sandstone above the unconformity with basement rocks. The alteration above the unconformity is marked by broad halos of uranium, boron, arsenic and accompanying base metal enrichment, typical of major uranium deposits in the Athabasca Basin. The alteration and geochemical enrichments are associated with steep faults intersected within the sandstone of the drill holes. The summer 2019 drill program, confirmed and expanded on this targeting.

CanAlaska President Peter Dasler comments, “The intersection of new high-grade uranium mineralization, following interpretation of the direction of the overlying faults and alteration, has given us far stronger confidence for a large uranium target in the immediate vicinity. Our technical staff is very impressed by the number of mineralized intercepts and associated alteration fingerprints at some distance from the important graphitic horizons.  In Athabasca-style systems they expect to see significantly more uranium mineralization deposited at the unconformity in proximity to the graphitic basement rocks and as such, expect to see further high-grade mineralization within the immediate vicinity of the current drilling. The additional mineralized intercept in drill hole WMA054, which was drilled in August from a site 325 metres to the west of high-grade hole WMA042, shows us that we have defined the geological context of the target.  We are already aware that multiple other targets exist to the northeast and southwest on this corridor.”

On behalf of the Board of Directors

This is the largest and highest-resolution magnetic survey completed in the history of the area.

Opawica has planned 5,000 meters of drilling on 20 targets over 15 configurations...

King has filed its permit application and engaged a diamond drill contractor for a Phase 1 program to test on 11 prospective targets....