February 28, 2019 / TheNewswire / Vancouver, Canada - Guyana Goldstrike Inc. (the "Company" or "Guyana Goldstrike") (TSXV:GYA, OTC:GYNAF, FSE:1ZT) is pleased to announce it has received the report on geophysical interpretation of the airborne magnetic and radiometric surveys on its Marudi Gold Project ("Marudi" or the "Property") located in the Guiana Gold Belt, Guyana, South America.

Mr. Peter Berdusco, President and CEO states, "The geophysics interpretation has greatly advanced our understanding of the controls on gold mineralization on the Marudi Gold Project and identifies priority targets to both expand the known mineral resource and discover new occurrences."

Magnetic and radiometric surveys are the norm in mineral exploration for basic geological mapping and drill target identification. Recent advances in interpretation include NASVD processing of radiometrics and calibration to elemental abundances, and most significantly 3D inversion of magnetics.

3D inversion of magnetics involves iteratively changing the physical properties (magnetic susceptibility) of each cell in a 3D matrix until the computed result matched the observed data. 3D inversion is computationally intensive, given the large number of matrix elements and the number of parameters, which was time consuming and limited by the power of PCs, but is now available commercially from offsite Cloud computing technology.

The results of 3D magnetic inversion is a complete image of the subsurface distribution of magnetic susceptibility, which by measurement on representative rock samples can be directly related to the geology. The 3D picture is critical in understanding the geological controls on mineralization, especially in structurally complex areas.

On Marudi, it is well known from previous drilling the primary host rock for gold mineralization is quartzite-metachert. Thick vegetation cover and deep tropical weathering profile made surface geological mapping of limited value. The 3D inversion results have correlated mineralization in the Mazoa Hill and Marudi North occurrences directly to rock with high magnetic susceptibility, that are correlated by the physical property measurements on core to the quartzite-metachert host rock.

DIRECT CORRELATION OF MINERALIZATION WITH MAGNETICS

The geophysical survey confirms the direct correlation at large scale of mineralization at Mazoa Hill with a band of strong magnetic susceptibility. 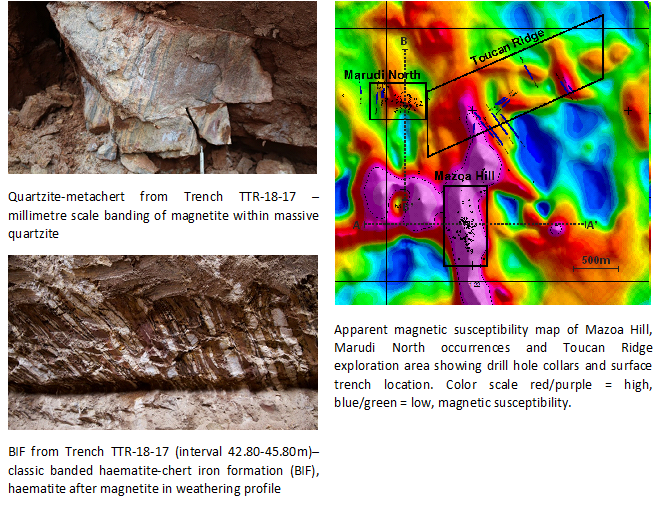 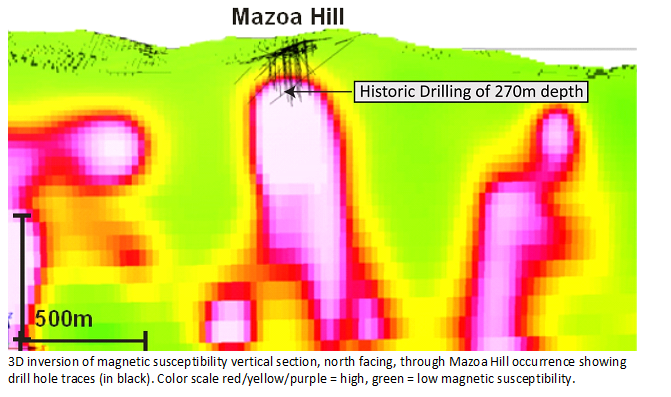 Three types of geophysical targets have been identified for further investigation: along strike and deeper than the known mineralization (Mazoa Hill and Marudi North), to expand the known mineral resource; under the anomalous Au assay results from trenching at the Toucan Ridge exploration area; and numerous magnetic anomalies of similar character across the Property. The targets near the known mineralization from previous drilling and trenching are ready for the next stage of detailed modelling to optimize logistics and trajectories for drilling, whereas targets farther afield would require trenching or shallow drilling to rank prospective targets.

The geophysical interpretation report also recommends further analysis of multi-element ICP analyses on core as a vector to mineralization, relogging of core to differentiate banded iron formation (BIF) within the quartzite-metachert, and additional physical property measurements (density, radiometrics) on core, all to refine the exploration model.

Data analyzed suggests that the mineralized zone is open at depth and to the southeast. Mazoa Hill zone mineral resource estimates:

For further information regarding the resource estimates, readers are encouraged to review the technical report "Marudi Property Mazoa Hill Mineral Resource Estimate", available under the Company's profile on SEDAR.

The independent Qualified Person responsible for preparing the report "Interpretation Report, Airborne Geophysics, Marudi Gold Project, Guyana for Guyana Goldstrike Inc" is Mr. S.R. McMullan, P.Geo. Mr. McMullan is a Qualified Person under the terms of National Instrument 43-101 for the purposes of this report and is independent of the Issuer.

Other scientific and technical information in this news release has been reviewed and approved by Mr. Locke B Goldsmith, M.Sc, P.Eng, P.Geo., Chief Geologist and Exploration Manager of Guyana Goldstrike Inc, a Qualified Person under the terms of National Instrument 43-101. Mr. Goldsmith is not independent of Guyana Goldstrike.

The Company is developing the Marudi Gold Project located in Guyana, South America.

The project has 18-year mining license in good standing, all-season road access, infrastructure in place, with an established camp serviced by employees, service buildings, and a full-time camp manager. The Property has three known gold bearing areas: the alluvial areas, the saprolite, and the underlying hard-rock.

There has been 42,000 metres of historic diamond drilling (141 holes) completed on the project by prior operators that have delineated two zones of mineralization: Mazoa Hill and Marudi North zones. The Company has recently completed a mineral resource estimate on the Mazoa Hill zone and discovered a third mineralized zone: Toucan Ridge.

This zone was the current focus of the Company's 2018 trenching program. There exists excellent exploration upside for the further discovery of mineralized zones through the development of previously and newly identified mineralized bedrock targets on the project.

For information concerning the mineral resource estimate and the project, readers are encouraged to review "Technical Report: Marudi Property Mazoa Hill Mineral Resource Estimate", a technical report prepared for the Company by Global Mineral Resource Services and is available at http://www.guyanagoldstrike.com/images/pdf/43101_Report_Guyana_Goldstrike_Mazoa_Hill_Zone_Jan_2018.pdf and under the Company's profile on SEDAR www.sedar.com.

The Republic of Guyana is located in South America adjacent to Suriname. The country is English speaking and under British Common Law with a democratically-elected government. It has an established mining act and a rich history of gold production. In 2016, 690,000 ounces of gold was produced by operators mining in the country. The Fraser Institute's 2016 Annual Survey of Mining listed Guyana as the third best mining jurisdiction with regards to investment attractiveness in the Latin America and Caribbean Basin sub-group. The Guiana Shield is the geographic gold-hosting region, and is world-recognized as a premier gold region that is highly prospective, under-explored and has geological continuity with West Africa.* In 2016, two mines in Guyana declared the commencement of commercial production: the Aurora deposit (Guyana Goldfields) and the Karouni deposit (Troy Resources).

On behalf of the Board of Directors of

This news release may contain certain "Forward-Looking Statements" within the meaning of the United States Private Securities Litigation Reform Act of 1995 and applicable Canadian securities laws. When used in this news release, the words "anticipate", "believe", "estimate", "expect", "target, "plan", "forecast", "may", "schedule" and other similar words or expressions identify forward-looking statements or information. These forward-looking statements or information may relate to future prices of commodities, accuracy of mineral or resource exploration activity, reserves or resources, regulatory or government requirements or approvals, the reliability of third party information, continued access to mineral properties or infrastructure, fluctuations in the market for gold, changes in exploration costs and government regulation in Guyana, status of artisanal mining activities and associated rights, and other factors or information. Such statements represent the Company's current views with respect to future events and are necessarily based upon a number of assumptions and estimates that, while considered reasonable by the Company, are inherently subject to significant business, economic, competitive, political and social risks, contingencies and uncertainties. Many factors, both known and unknown, could cause results, performance or achievements to be materially different from the results, performance or achievements that are or may be expressed or implied by such forward-looking statements. The Company does not intend, and does not assume any obligation, to update these forward-looking statements or information to reflect changes in assumptions or changes in circumstances or any other events affections such statements and information other than as required by applicable laws, rules and regulations.

This is the largest and highest-resolution magnetic survey completed in the history of the area.

Opawica has planned 5,000 meters of drilling on 20 targets over 15 configurations...

King has filed its permit application and engaged a diamond drill contractor for a Phase 1 program to test on 11 prospective targets....