BRIDGEWATER, NS / ACCESSWIRE / April 30, 2019 / Silver Spruce Resources Inc. ("Silver Spruce" or the "Company") (TSXV: SSE) (Frankfort: S6Q1) is pleased to announce that it has received the assays from confirmation samples taken by a third-party, arm's length company at the two, large potential bulk tonnage targets, El Terrero and the Gossan areas on its Pino de Plata project in western Chihuahua State, Mexico. The Company contracted Prospeccion y DesarrolloMinerodel Norte, S.A. de C.V. ("ProDeMin") to complete detailed geologic mapping, sampling and reconnaissance at the project under the direction and supervision of Qualified Person, Dr. Craig Gibson, Ph.D. The field program is complete, and three assays from seven rock-chip samples taken during the program returned three over-limit values for silver and two over-limit values for lead, which further confirm the presence of high-grade mineralization at the project. Assaying and multi-element analysis was conducted by ALS Global in Vancouver, B.C. 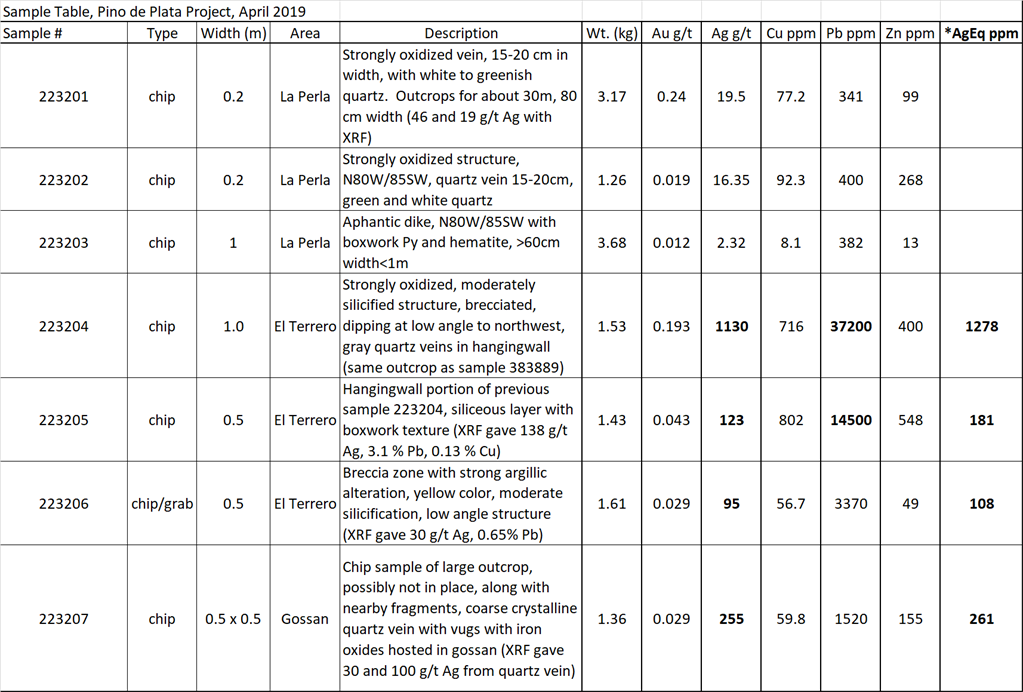 "We are very pleased with the results from the recently completed field program at Pino de Plata. In addition to the discovery of new vein targets and the significant expansion of the large target areas of El Terrero and the Gossan, assays of samples taken by ProDeMinverify the tenor of existing mineralization in two large areas that may host significant mineralized tonnage. With the data generated during this program we are now prepared to drill Phase I with greater confidence," stated Karl Boltz, CEO of Silver Spruce.

The first objective of additional, third-party confirmation of mineralization at El Terrero and the Gossan areas is complete and very successful.

Analysis of XRF and NIR data continues with conclusions and proposed drill hole collars and orientations progressing. Cross sections of planned drill holes are being produced and will be presented shortly. The final report from ProDeMin with results of the field program will be posted on the Company's website as soon as completed.

The El Terrero structure is confirmed to be a low angle structural zone in the intrusion and could host significant tonnage. This 800 m x 400 m (32 hectares) zone appears to consist of a wide zone of multiple flat-lying brecciated zones hosted by a zone of strong argillic alteration observed extending from the El Terrero workings to the La Perla and Sierpe veins.

Field reconnaissance, mapping and sampling produced indications that the expanded 800 m x 400 m area of intrusive alteration identified at El Terrero may extend and be continuous with the expanded 600 m x 400 m(24 hectares) area of gossan to the east. A drill hole is now planned to confirm this. It will be oriented to drill under the shallow cover of volcanic rocks to the west of the Santa Clara vein to reach the targeted mineralization below.

The Gossan area measures about 24 hectares and provides a second, large scale, potential bulk tonnage target. One recent sample taken from a quartz vein in the eastern Gossan area assayed 255 g/t Ag with anomalous Cu and Pb. Mapping in the Gossan area has further delineated and expanded the contact between intrusive rocks and hornfels.

Mapping indicates that the gossan may have formed along north-south and easterly-trending structural zones as seen at the other targets at the project. Drilling is planned to test for massive sulfide replacement bodies along these structures as well as the contact zones with hornfels and limestone at the Santa Elena target where skarn is observed.

Silver Spruce was attracted to the 397 hectare project by the assays originally presented by the previous owner, a private Mexican citizen and professional metallurgist.

These previous owner assay data have not been independently verified and should not be relied upon as representative of the average grades present on the project. The samples were likely selective, hand-sorted and were collected for the purpose of developing a small scale operation to mine high grade material for direct shipping to mills and smelters.

Silver Spruce fieldwork continues to verify the existence and tenor of the mineralization at Pino de Plata.

The tenor of outcropping mineralization associated within the large areas of intrusive alteration suggest potential to delineate a bulk-tonnage resource at El Terrero and the Gossan areas. The Pino de Plata project is located just 15 straight-line kilometres from the Palmarejo Mine, owned and operated by Coeur Mining, Inc. (NYSE:CDE) ("Coeur").

Coeur stated during its recent Q4 2018 Earnings Conference Call February 21, 2019, 11:00 AM ET, that the company is "…prioritizing capital to Palmarejo, which continues to prove itself with strong operating cash flow. With excess mill capacity finding supplemental ore sources that can further improve profitability remains a priority."

Coeur acquired the mining concessions surrounding Pino de Plata via its acquisition of Paramount Gold and Silver Corp. ("Paramount") (NYSE MKT and TSX: PZG) in an all-stock transaction valued at US$146 million, in 2015.

Samples were prepared and analyzed by ALS Global, a certified worldwide analytical services provider at their facilities in Chihuahua and Vancouver, respectively.Analysis was by the AuME-TL43 method, with analysis of all elements by ICP-MS and ICP-AES with aqua regia digestion. Au was determined as part of the package with a 25 gram digestion.Over-limits for Ag and Pb, values of >100g/t and >10,000ppm, respectively, were completed by the OG-46 method by ICP and aqua regia digestion.

Dr. Gibson supervised the data collection and sampling at the project as well as data compilation, drafting and interpretation.The Company uses standard QA/QC procedures, including inserting control samples, standards and blanks, in the sample stream. No quality assurance/quality control issues have been identified to date.

Dr. Craig Gibson, Ph.D., CPG, is the Company's external Qualified Person for the Pino de Plata project and is responsible for the technical content of this press release within the meaning of National Instrument 43-101 Standards of Disclosure for Mineral Projects ("NI 43-101"), under TSX guidelines.

Silver Spruce Resources Inc. is a Canadian junior exploration company pursuing development of the Pino De Plata project, located in the prolific Sierra Madre Occidental region of western Chihuahua State in Mexico. The Company also holds an indirect interest in the Kay Mine project according to terms of the sale agreement with Croesus Gold Corp., which was announced in the Company's news release on January 30, 2019. Silver Spruce Resources Inc. continues to investigate opportunities that Management has identified or that have been presented to the Company for consideration.

Evaluation of surveys is ongoing and results will be released once data is compiled. The Property has been permitted for diamond drilling.

Stratabound looks forward to receiving the remaining drill results, testing the continuity of mineralized zones between past drilling..

Steve Cochrane President and CEO comments: "We continue to see very high grades of lithium from the brine sampling...."